Oklahoma Governor Mary Fallin is starting to feel surrounded. On her state’s southern border, Texas has no income tax. Now two of its other neighbors, Missouri and Kansas, are considering plans to cut and eventually abolish their income taxes. “Oklahoma doesn’t want to end up an income-tax sandwich,” she quips.

On Monday she announced her new tax plan, which calls for lowering the state income-tax rate to 3.5% next year from 5.25%, and an ambition to phase out the income tax over 10 years. “We’re going to have the most pro-growth tax system in the region,” she says.

She’s going to have competition. In Kansas, Republican Governor Sam Brownback is also proposing to cut income taxes this year to 4.9% from 6.45%, offset by a slight increase in the sales tax rate and a broadening of the tax base. He also wants a 10-year phase out. In Missouri, a voter initiative that is expected to qualify for the November ballot would abolish the income tax and shift toward greater reliance on sales taxes.

South Carolina Governor Nikki Haley wants to abolish her state’s corporate income tax. And in the Midwest, Congressman Mike Pence, who is the front-runner to be the next Republican nominee for Governor, is exploring a plan to reform Indiana’s income tax with much lower rates. That policy coupled with the passage last week of a right-to-work law would help Indiana attract more jobs and investment.

That’s not all: Idaho, Maine, Nebraska, New Jersey and Ohio are debating income-tax cuts this year.

But it is Oklahoma that may have the best chance in the near term at income-tax abolition. The energy state is rich with oil and gas revenues that have produced a budget surplus and one of the lowest unemployment rates, at 6.1%. Alaska was the last state to abolish its income tax, in 1980, and it used energy production levies to replace the revenue. Ms. Fallin trimmed Oklahoma’s income-tax rate last year to 5.25% from 5.5%. 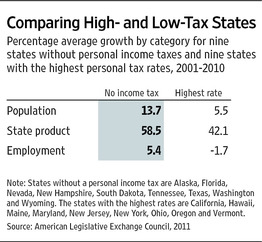 The other state overflowing with new oil and gas revenues is North Dakota thanks to the vast Bakken Shale. But its politicians want to abolish property taxes rather than the income tax.

They might want to reconsider if their goal is long-term growth rather than short-term politics. The American Legislative Exchange Council tracks growth in the economy and employment of states and finds that those without an income tax do better on average than do high-tax states. The nearby table compares the data for the nine states with no personal income tax with that of the nine states with the highest personal income-tax rates. It’s not a close contest.

Skeptics point to the recent economic problems of Florida and Nevada as evidence that taxes are irrelevant to growth. But those states were the epicenter of the housing bust, thanks to overbuilding, and for 20 years before the bust they had experienced a rush of new investment and population growth. They’d be worse off now with high income-tax regimes.

The experience of states like Florida, New Hampshire, Tennessee and Texas also refutes the dire forecasts that eliminating income taxes will cause savage cuts in schools, public safety and programs for the poor. These states still fund more than adequate public services and their schools are generally no worse than in high-income tax states like California, New Jersey and New York.

They have also recorded faster revenue growth to pay for government services over the past two decades than states with income taxes. That’s because growth in the economy from attracting jobs and capital has meant greater tax collections.

The tax burden isn’t the only factor that determines investment flows and growth. But it is a major signal about how a state treats business, investment and risk-taking. States like New York, California, Illinois and Maryland that have high and rising tax rates also tend to be those that have growing welfare states, heavy regulation, dominant public unions, and budgets that are subject to boom and bust because they rely so heavily on a relatively few rich taxpayers.

The tax competition in America’s heartland is an encouraging sign that at least some U.S. politicians understand that they can’t take prosperity for granted. It must be nurtured with good policy, as they compete for jobs and investment with other states and the rest of the world.

“Our goal is for our economy to look more like Texas, and a lot less like California,” says Mr. Brownback, the Kansas Governor. It’s the right goal.